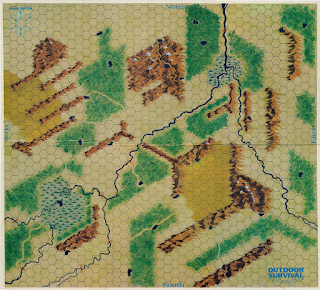 It's well-known among old school gamers that original D&D calls for using the game board from the Outdoor Survival board game for wilderness adventures. Outdoor Survival is listed under "Recommended Equipment" on page 5 of the Men & Magic booklet, and on page 15 of The Underworld & Wilderness Adventures, it states "OUTDOOR SURVIVAL has a playing board perfect for general adventures. Catch basins are castles, buldings are towns, and the balance of the terrain is as indicated."

What seems to be much less well-known is that there is an entirely different method for mapping the wilderness called for in original D&D. This method is also used by old school gamers, but for whatever reason it has received much less attention and commentary. On page 15 of The Underworld & Wilderness Adventures, immediately above the previous quotation, it also states:

The terrain beyond the immediate surroundings of the dungeon area should be unknown to all but the referee. Off-hand adventures in the wilderness are made on the OUTDOOR SURVIVAL playing board (explained below). Exploratory journeys, such as expeditions to find land suitable for a castle or in search of some legendary treasure are handled in an entirely different manner.

This passage shows that there are actually two fundamentally distinct kinds of wilderness maps for use with D&D. The first is a map created by the referee, which is unseen by the players: "The terrain beyond the immediate surroundings of the dungeon area should be unknown to all but the referee." This is indeed "entirely different" from the Outdoor Survival board, which shows all the terrain and main locations (towns and castles) to the players as soon as it is placed on the gaming surface.

Page 16 of U&WA provides some additional clarity about the other type of map to be used for wilderness adventures:

REFEREE'S MAP is a wilderness map unknown to the players. It should be for the territory around the dungeon location. When players venture into this area they should have a blank hexagon map, and as they move over each hex the referee will inform them as to what kind of terrain is in that hex. This form of exploring will eventually enable players to know the lay of the land in their immediate area and thus to be able to select a site upon which to build their castles. (Castle buliding and its attendant requirements will be covered hereafter.) Exploratory adventures are likely to be the most exciting, and their incorporation into the campaign is most desirable.

What follows is a set of rules for determining the rate of movement in the wilderness, based on terrain type and the type of creature or vehicle moving.

Using a referee's map unknown to the players sets up the possibility of "exploratory adventures," where much or all of the terrain and special locations are initially unknown to the players. The wilderness map is "for the territory around the dungeon location," which indicates the use of a dungeon as the central starting point for a campaign. The text calls for the players' use of a blank hex map which they fill in as they explore. It also specifically mentions that wilderness exploration will "eventually" enable players to find suitable sites "upon which to build their castles." The "eventually" indicates that building a castle is seen as appropriate for higher level characters. It's noteworthy that part of the value of a wilderness map is that it supports this "end game" of D&D, where the characters build strongholds and become lords of the surrounding area.

The second type of wilderness map itself consists of two maps, one for the referee and one for the player. The text itself calls for players to be given a completely blank hex map, which they only fill in as they explore. Actual early D&D products with wilderness maps often soften this, giving players a partially filled in map, and giving the referee the completed map. We can see this in the City State of the Invincible Overlord and other Judges Guild Wilderlands products, and also in the player's map from the D&D Expert module X1 The Isle of Dread.

In addition to the fact that the Outdoor Survival board does not support the same kind of exploratory play as a referee's map, since the main features on the board are immediately visible, another important difference between the two is that the Outdoor Survival board has hexes that are not numbered, while hex maps of the sort used in the 1970s for wargames usually had numbered hexes. Numbered hexes are quite handy (I would say essential--perhaps more on that in a later post) for campaign play, in that the referee can keep a separate document for the wilderness map which contains details of locations and events keyed to each hex. With the Outdoor Survival board, it is much more difficult to record information that can be localized to a hex, and so it is more difficult to keep and record data on special locations (such as monster lairs discovered by the players) that can be referred to in later sessions of the game. This makes the Outdoor Survival board better for "off-hand" adventures, rather than adventures that are part of an extended campaign set in a well-developed world.

Addendum: The excellent YouTube channel Geek Gamers has a video discussing Jon Peterson's new book, The Elusive Shift, which covers the history of what are now called tabletop RPGs from around 1975 to 1980. At around 9:06, the creator of the video discusses their particular copy of the Outdoor Survival board, which has custom features added to it by a previous owner, including an alphanumeric key written in by hand to help identify each hex. It seems that early players of D&D understood the importance of using numbered hexes to support wilderness play, even when using the Outdoor Survival board.